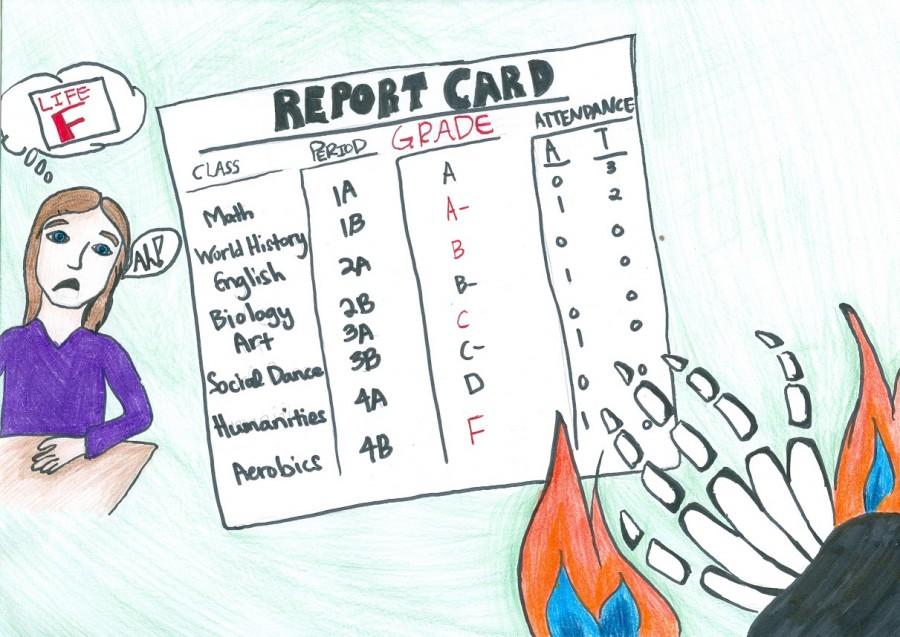 Report card day. As the second period dementor hands back the paper of death, students cringe in their seat as they see their final grades. That AP student inwardly groans because they were 2.86% away from their perfect 4.0 GPA. Next to them, a student glowers at the F that soiled their transcript. Great. Now this individual is not only coping with their mother’s death, they also have to attend credit recovery. Somewhere across the room, students high five each other because they managed to pass four of their eight classes this quarter.

If one were to base their definition of failure on the marks on their report card, 60% or less denotes failure. That being said, to some, a C+, or 75% might as well be an F. Eventually, the question arises as to whether failure in one class designate the individual as a failure.

Senior, Kaitlyn Lassig, said, “Failure is just a sad word. It means you lost– like trying to win and lose– you lost.”

Yet where do such soul-crippling feelings of failure come from? One possible explanation roots from the imposter syndrome. Imposter syndrome is a term used to describe the unjustified feelings of inadequacy one feels even in the midst of true personal high-achievement and skill.

One afflicted with imposter syndrome is generally in a position of power and success, and though accomplishments are obvious to others, personal delusions are overpowering. Countless CEO’s students, and celebrities are afflicted with impostor syndrome, whether conscious of it or not. Tina Fey once said in an interview, “The beauty of the impostor syndrome is you vacillate between extreme egomania and a complete feeling of: ‘I’m a fraud! . . . They’re on to me! I’m a fraud!’”

There is value in failure, however, because disappoint in life remains inevitable. At times, students become obstructed in their quest for glory due to unforeseen events or circumstances that remain outside of the individual’s control. Hence, when one feels as though they have failed, they should not turn towards themselves with self-loathing and rage. Rather feelings of failure should be met with introspective reflection and the recognition that it is never too late to change.

Senior, Ryland Sloat, said, “No one can really tell you if you failed at something and if you did. […] Academically if you’re successful all you really need to worry about is the fact that you’re learning something and that you’re honestly obtaining knowledge. I mean, I know there’s a lot of talk about grades and all that stuff. In the big scheme of life, grades are super irrelevent.”