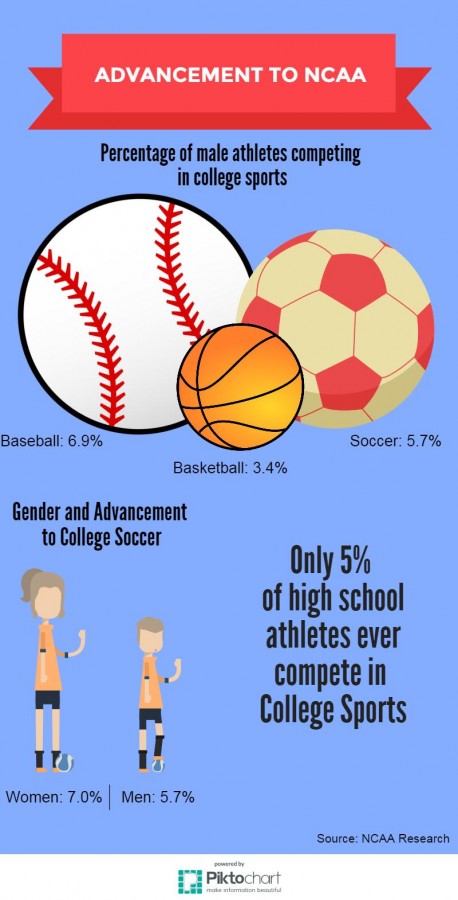 “Don’t all athletes dream of becoming professionals?” asked Prince Mugisha, a senior on the men’s soccer team. According to statistical data from the National Collegiate Athletics Association (NCAA), only 430,000 of the eight million students currently enrolled in high school sports will continue to compete in college. The other 95% who once dreamed of ‘becoming professionals’ make peace with alternate career paths. “Realistic” ones.

“I would love to play. . . but I understand that my education is the most important thing. It’s imperative that I pursue something that interests me but at the same time guarantees a future,” said Mugisha. “My future career, at this point at least lies in the field of medicine.”

The dream of being a professional is either warped or completely derailed by statistics against high students’ favors. “It was never a realistic goal for me,” said Kaitlyn Toluono, a senior on the womens’ basketball team. “Maybe becoming a coach, but playing professional does not seem like a goal that can be reached.”

For the 0.08% of athletes who score the chance to play professionally, success is assumed. Life is automatically set. Fortune, attention. However, is the most ”successful” athletes who seem to ignore the most realistic fate of their career. According to Huffington Post, 78% of NFL players go broke after retirement. Similar statistics mirror across all planes of professional sports. *find some* A lack of financial investment knowledge and general career-making education breeds a silent crisis for people who never seemed to need a backup plan.

Wherever plans seem to direct, all experiences seem to smooth out in the relationship between sports involvement and schooling. “The sport of basketball has influenced me. . . If I didn’t play, I [wouldn’t] have done well in school. The work ethic from sports has carried on into my high school studies,” said Toluono.

Sports involvement seems to generate a sense of realism to future aspects as well as current. “I’m very realistic about my ability, my strength, and my weaknesses,” said Mugisha. “I see my future in sports in the stands cheering on those who were qualified to make it.”