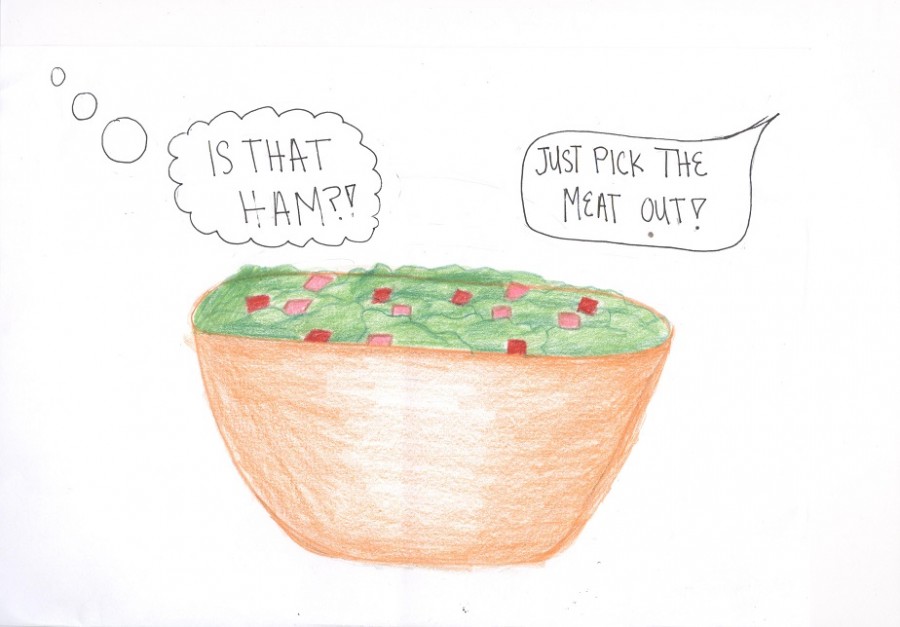 It’s an old stereotype: students hate school lunch. Whether the food is too cold or falling apart or the lunch ladies are forcing students to eat something they don’t want, everyone has a different view on school lunch.

Whatever it is, there are definitely not enough vegetarian options for students.

The peanut butter and jelly option gets old after a while, and the slices of cheese with a few chips just looks sad.  Even the go-to item, salad, has meat in it.

Junior Alayna Bentley said “They do have salads, which is good, but I don’t want salad every day and they also have chicken in it.”

Alumni Dani Ross (real name withheld) said, “I’ve heard how they do [salads] now, with the meat in it already.  I think they should serve the meat in little plastic containers for those who want to add it, and then the vegetarians won’t have to try and pick all the bits out and waste the meat.”

Cheese pizza and nachos aren’t suitable to eat every day but students who have to buy school lunch are forced too because there isn’t a variety of things to choose from.

“While peanut butter and jelly sandwiches and cheese pizza have long reigned as vegetarian option kings in school cafeterias… labeling a food organic doesn’t make it healthy, saturated fat and cholesterol can easily find their way into a vegetarian school lunch when oily cheese pizza is an afternoon mainstay. ” said Juliann Schaeffer, author of “What’s for Lunch? Schools Bring Vegetarian Options to the Table” in Today’s Dietitian.

“A lot of vegetarian foods aren’t necessarily low in fat or saturated fat, and they can be very high in cholesterol and sodium” says Susan Levin, MS, RD, a staff nutritionist at the Physicians Committee for Responsible Medicine (PCRM). She names cheese pizza as an example: “That to me is not an acceptable alternative to any other junk food like chicken nuggets. Dairy is the No. 1 source of saturated fat in kids’ diets, so you’re not only not getting that out, you’re giving them more.”

Ross talks about what her school lunches were like when she went to school. She said, “I brought my own lunch every day, but on Friday I would buy a lunch because of the awesome salad bar they had.  It was very popular, and I had to wait in line for what felt like an eternity, but it was worth it.  The lettuce and other toppings were always fresh… The best part for vegetarians is that the meat wasn’t mixed into the salad, but was an optional side.”

When Bentley was told the idea of a fresh salad bar she said, “With lots of stuff to put on [the salad] that would be… amazing.”

An article about Healthy School Lunches by the Physicians Committee for responsible medicine says, “Including a daily plant-based entrée such as a veggie burger, bean burrito, or fresh garden salad from the salad bar not only addresses inadequate consumption of healthful plant-based foods and helps form healthier eating habits, but can also lower children’s fat, calorie, sodium, and cholesterol intake by reducing consumption of processed meat and dairy products such as cheesy pizza.”

Food is good, food is great,  and food should be available to all types of people.  Vegetarians shouldn’t be left out. There might be bumps in the road as we try to make this happen at our school, but as Alfred A. Montaperi said, “Expect problems and eat them for breakfast.” Let us just hope that the breakfast doesn’t have meat.