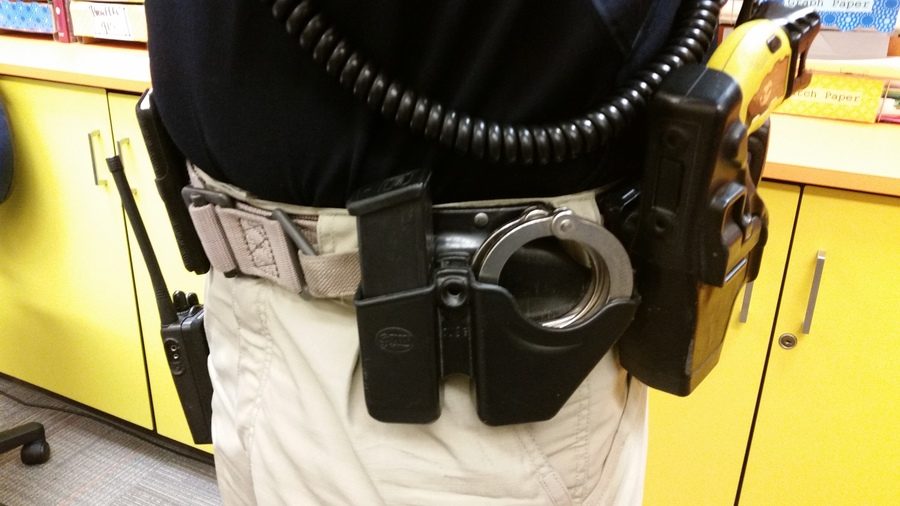 What were once symbols of security now cause people unease. Officers are being viewed differently due to the recent incidents of excessive force.

With police stories appearing ominously in the news almost weekly, students may ask themselves is the force the police exudes too excessive or reasonable? Do we even really know?

The perspective of a high school student will obviously be different from an older adult, and the two may have different opinions on what the police should be able to enforce and enact. Knowing what is going on in the world and having an opinion on the police brutality issue is the first step in understanding exactly what it is.

In the morning hours of August 7, 84-year-old Geneva Smith was pepper sprayed and arrested as the police of Oklahoma were in pursuit of her son. She almost died from the actions, according to cnn.com.

After a violent Labor day weekend in Chicago with 65 shot and 13 of those being fatal, Chicago police superintendent Eddie Johnson said, “It’s not a police issue, it’s a society issue.”

Is it the police that need an adjustment, or the people? This million-dollar question can stir up quite the dilemma between people and in oneself.

“Like everything else in the world, you’ll have a group of guys and 90% will be good and 10% aren’t. I support them [police] because they are doing exactly what they are trained to do and when they put themselves in situations to protect others’ lives, they need to be willing to use force when necessary. Without the police force, we would be in a larger mess than we are today. We need police and they have a bad rep because of recent incidents, but that does not take away from all the good they do as well,” said senior Alex Frampton.

With the media usually only portraying the police force negatively it can be easy to become biased, but it’s better to keep an open mind on potentially controversial issues as in the police brutality case.

Officer Roby of the Kentucky Police Department was called to a unique shoplifting call at a local grocery store one morning. The case? A man was accused of stealing only one thing: baby formula. Instead of citing the man, Officer Roby bought him several cans of formula and told him to have a nice day.

Though there are positive stories, sadly the bad ones outnumber the good ones and that is just a fact. Approximately 663 people have been shot and killed by police just this year.

“In my opinion, the force police exude is too excessive to the point of annoyance in that they often tend to focus their attention on minor situations at times, rather than matters that are of utmost importance. For example, several cops tend to focus much of their attention on giving tickets to civilians driving in small remote locations throughout the city rather than giving tickets to speeders on a high traffic roadway. This is not reasonable because why should someone less threatful to the safety of others be punished rather than the extremely threatful unsafe speeder who could severely injure innocent beings. Therefore, this happens to be only one of the several unjust situations that cops take part in and because of this, I believe that cops role in society should be to enforce punishments on serious threats and on securing the welfare of civilians rather than ticketing people for end of the month paychecks and personal benefits.” said senior Tiffany Tagavaihee.

Opinions differ right here in Taylorsville High School, and that is totally ok. Nothing has been accomplished by everyone agreeing on something.

“In the end, it differs from state to state. Especially in areas with lots of racial tension, police tend to exercise their power too strongly. There are tons of examples in places like Chicago and New York. Even in Utah, my dad got charged with a DUI even though he was driving sober and taking home those who were intoxicated. He fought it and eventually came out innocent, but it cost our family time and money all because a police officer exercised his authority unjustly.” said senior Noah Hasler.

All in all, it is up to a student to decide whether or not they think the force police exude is too excessive or reasonable, but facts will always shine through.