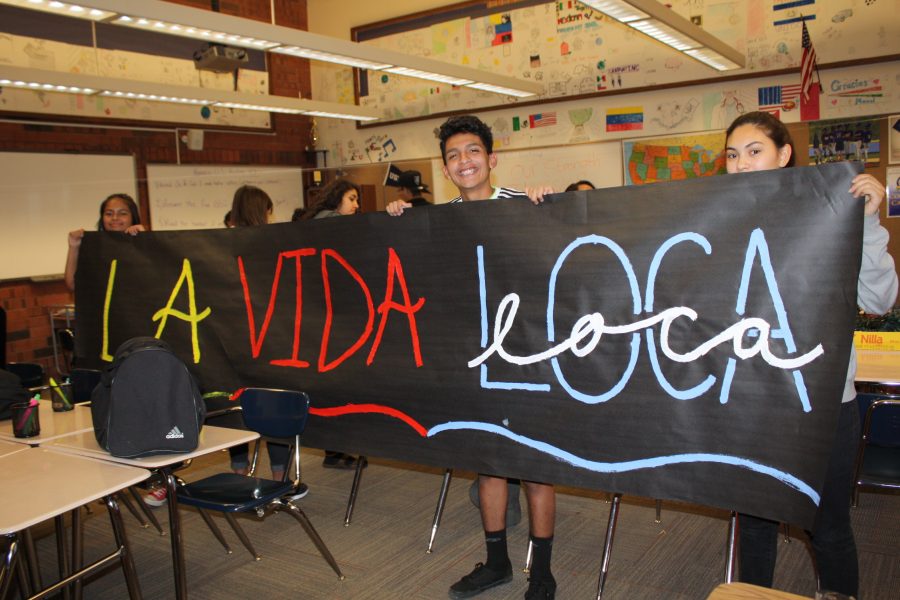 Latinos in Action students hold up a banner made for the annual LIA dance.

Walking through upper I hall, you find the usual history classes. However other classes are also found such as AVID, and Latinos In Action (LIA). LIA in particular seems carry around some misconceptions that most students believe. It turns out that most of these misconceptions aren’t really true.

Many former and current students believe that LIA is a club. However, it is actually a class. Unlike some organizations that are both, LIA is only a class where you have to sign up to be a part of. It has its own curriculum with a number of required community service hours.

Yet LIA is often viewed as an easy elective class. Senior and Vice President of LIA, Jared De Leon, says, “This is proven to be a really big misconception because I’ve taken the class, this is my second year, I’ve been able to see how dedicated a lot of the students, almost all of them are and how much work they actually put in”.

While LIA does count as an elective, unless you are involved, it is not considered an easy class. Students have to help when events are organized, be able to have eight hours of community service, and go to class in order to pass.

LIA has Latinos in the name, so many often believe that it is only for latinos; but it is actually open for everyone, regardless of their race/ethnicity. Micayla Brach, senior, is currently in LIA, even though she does not have a hispanic background. Brach says, “I feel like a lot of people don’t think that white people are in LIA because we are not Hispanic and LIA is LATINOS in action”.

She isn’t the only one that is in LIA and does not have Hispanic roots. Students that don’t come from a hispanic background are often asked why they are in it in the first place. She states, “It’s a little weird sometimes because it’s mostly generated around Latinos, but I’m still a part of it and it’s comfortable there”. This is because LIA is actually a great opportunity to do volunteer work. It isn’t about the race/ethnicity of the person, but the volunteer work that is being done.

One of the main purposes of LIA is to teach leadership and teamwork skills through volunteer work. Eduardo Barba, junior and Professional director of LIA, says, “LIA has taught me advanced leadership skills, in terms of how to organize events within schools or for the community”.

Leadership skills are great for students to learn in high school, because it helps them when they are heading to college. Barba echoes this opinion when he says, “They (leadership skills) are beneficial because it not only gets you prepared for college and the community service that comes with it but also for the work force that lays ahead.”

Not only does community service take place outside of the class, but it also has a place within class time. During class, the students often head over to Plymouth Elementary to tutor the students that are not on grade level.