Tennis team hopes for a victory in their new region 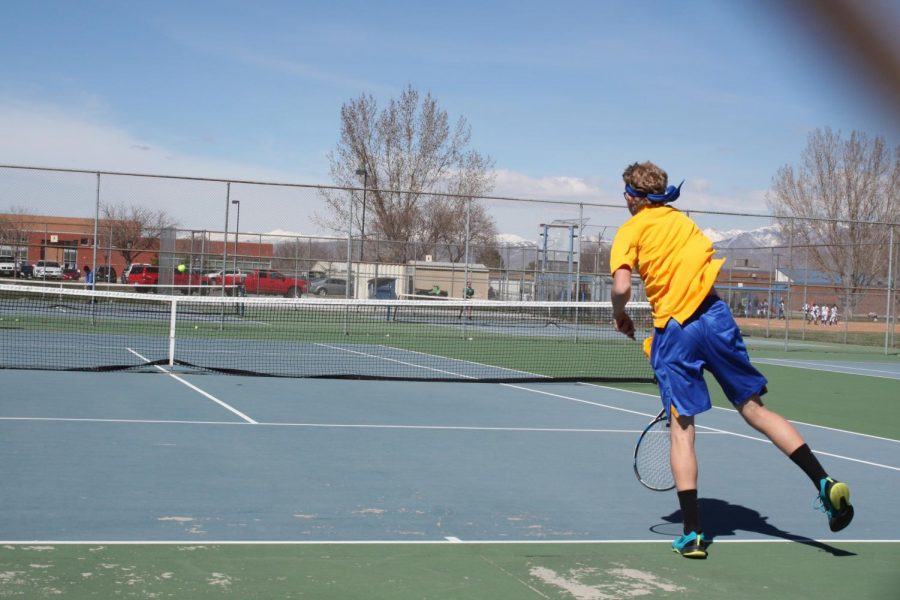 Junior, Jessie Marchant partices his serves at the tennis courts located on the East side of the school for an upcoming tennis match

As the tennis season is well underway for the men’s team players, many students don’t know a lot about Taylorsville High School’s Men’s Tennis team or tennis itself.  Tennis is a sport that is played worldwide. Each tennis match is made up of two to three sets. Tennis can be an individual game against an opponent, or tennis can be played in doubles in the team. When playing, athletes stand on opposite sides of a net and use a stringed racket to hit a ball back and forth to each other. With a new region this year, the tennis team has a lot of work and hard matches ahead of them.

At the end of last school year, it was announced that Taylorsville High School’s sports region would change to 6A.  This gave Taylorsville a challenge. This region competes with bigger schools. Typically there are more on the team and the region is harder because there are better players. Riverton, Herriman, Copper Hills, and West Jordan are in the new region.

Junior, women’s player, Allison Gabbitas, said, “The thing I like most about tennis is how united our team is and when I drill and overhead into someone’s face.” While the teams are very united and work together for victories, tennis is also a very individual sport. “Another thing I like about tennis is that it is an individual sport.  Rather than playing on a full team like soccer, tennis is very personal, so I can focus on what I need to do to play well rather than what everyone on the team has to do.”

Senior, men’s player, Chase Smith, said, “I want people to be more committed to the team and have some team barbeques!”  He loves the unity of the team that makes it feel like a family. In most sports this is true, you spend so much time practicing and learning together that you learn to love each and help one another.

As Gabbitas talked about her season in the fall she said, “The most difficult match of the season for me could be interpreted many different ways.  Emotionally, probably was a match against Copper Hills because I had to control my rage every time she called a shot as out. [The referee] called everything out!  It was so infuriating!”

Like in many sports, the game is called by the referee which sometimes brings a biass into the picture.  Players learn to roll with whatever is called and keep trying hard to do their best.

Senior, Chase Smith, plays doubles and singles during matches. He said, “The first match against Bingham just because they are one of the hardest schools in the State.  It was our first one and it started off kind of bad. It was a dampener but we got over it and are going strong.”

Some matches this season will come with fairly easy victories while others will be a fight to get on top.  You can find the tennis team on the courts, almost every day after school practicing and preparing for their next matches. Every Tuesday, they have away matches and Thursday’s are home match days. Go out, have some school spirit, and support the tennis team.  The State Tournament is on May 17 and 19 at Liberty Park.