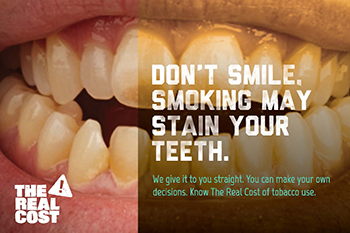 In 2014, the Food and Drug Administration (FDA) launched its first tobacco-focused public education campaign, The Real Cost, aimed at reducing tobacco use among junior high and high school students in the United States. The campaign was designed to encourage youth who had never smoked but are susceptible to smokers (susceptible nonsmokers) and youth who had previously experimented with smoking (experimenters) to reassess what they know about the “costs” of tobacco use to their body and mind.

The Real Cost aired on national television, online, radio, and other media channels, resulting in high awareness levels. Overall, 89.0% of U.S. youth were aware of at least one advertisement 6 to 8 months after campaign launch, and high levels of awareness were obtained within the campaign’s two targeted audiences: susceptible nonsmokers (90.5%) and experimenters (94.6%). High levels of ad awareness are a critical first step in achieving positive changes in tobacco-related attitudes and behaviors.

In 2015, the FDA conducted a study in an attempt to uncover how effective this campaign was. The majority of the students who participated perceived The Real Cost advertisements as effective, reporting high levels of agreement with items such as the ad “grabbed my attention” and was “powerful,” “worth remembering,” and “convincing.” On a scale from one (not effective) to five (totally effective), the study received an average of 3.99 from its participants.

The Real Cost campaign has grown and blossomed since its original launching. The FDA has had to institute significant expansions to combat the rise of the e-cigarette and the vape pen. Today someone can find just as many Real Cost ads focused on vaping as they can on cigarettes, perhaps more. However, even as their focus has expanded the FDA has effectively maintained their high viewer counts, increasing their chances for their campaign to be effective.

Currently, the FDA is using The Real Cost to target social media as well as establishing a physical presence in high schools. They have actually met some resistance from various state legislatures when they originally began placing their ad posters in high schools across the country.

Utah schools have begun posting the campaign. Real Cost posters can be seen in bathrooms, classrooms, and hallways. There is no doubt that they have been seen and read. However, their effects or lack thereof have yet to be seen.