HAS PHUBBING RUINED THE ART OF CONVERSATION? 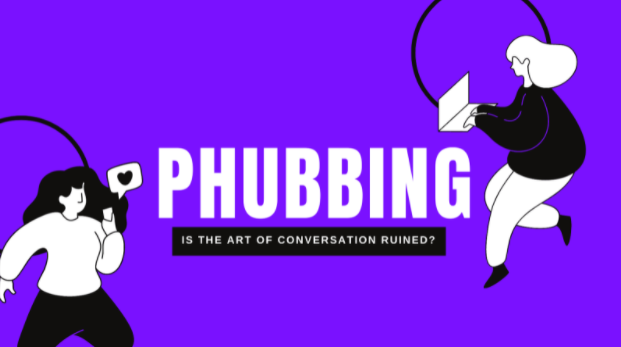 Phubbing is a new social phenomenon that is taking over our generation. “Phubbing” is defined as technology taking away from active face-to-face interaction. Whether you know it or not, you have been phubbed. Phubbing seems relatively harmless and has become a part of our modern world, but studies have shown that it affects the way our relationships are formed and the longevity of the bond.

In one recent study, Karen M. Douglas PhD, researched the subject of phubbing and found that we are threatening our own fundamental needs. Douglas said we are destroying our sense of belongingness, self-esteem, meaningful existence, and our self control. Douglas found that we are ostracizing ourselves and excluding others from our lives. This could be immensely detrimental  as we seem to be on our phones quite often.

Another paper published in the Journal of Applied Social Psychology found that subjects being in a simulated situation where phubbing occurs felt the interaction was exceedingly negative. When the test subjects were put in the simulation where phubbing was not occurring, they claimed it was extraordinarily positive. The author of the Happiness Track, Emma Seppälä, brings up the point that technology is meant to connect us.As it seems, technology is actually dragging humanity farther and farther apart.

Wanting to see the opinion of students of Taylorsville High, a Google Form was sent out asking their viewpoint about phubbing. The question of the emotions felt while phones were being used in conversation was posed and the most common answers were annoyed, hurt and disrespected. Then the answer to the question of the emotions felt when the technology was put away was meaningful, engaging and genuine. The last and most important question asked to the student body of Taylorsville was has technology ruined the art of conversation? An astounding 53% of students said technology had not ruined the art of conversation while 46% of those given the survey said it had.

The question of how we can avoid phubbing and possibly eliminate the situation is broad and is essentially unfixable. We can create better habits for ourselves, we can become aware of the actions and habits we do and try to consciously avoid them. We can generate situations where technology is appropriate and where it isn’t. One of the most proactive ways to destroy your habit of using technology inappropriately is setting up screen time. You can set a certain time limit on apps and will inadvertently make it so that time is precious. Turning technology time into a sacred thing can make it so it won’t transpire as often.

Now reader, I have one immensely important question for you, has technology ruined the art of conversation?