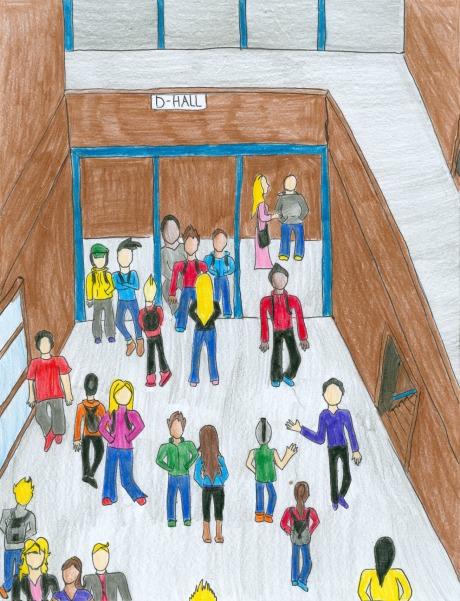 Everyone is bumping into each other, people are pausing in the middle of the hallway to talk to their friends, and some students think that running solves the problem: the hallway traffic here at the school has become atrocious. We have 1,660 students trying to get from place to place. This can be irritating to anyone . Getting from place to place can be very hard without a flow to the traffic.

It’s possible to actually take into consideration that there are others who need to pass by. It’s morning, it’s hard to think, it’s understandable.. Our minds aren’t really awake yet. Everybody goes through this but after school, what excuse is there? There’s always room for improvement.

Braydee Kaas, a junior, enjoys walking in the hallways, but she still has concerns when making her way to wherever she has to go.

Kaas said, “Sometimes there’s a bunch of people. I hate that people walk slow and I don’t want to get pushed into things. When there’s a circle of kids in the middle of the hallway, it’s difficult to get from point A to point B.”

She wasn’t exactly sure on how to improve the traffic but she’s sure that there could be a way.

There are some pros to this situation though. Students are actually able to get somewhere, there’s a chance to see your friends that don’t share a class, reunite with old classmates, and get exercise. Walking through the hallways can be fun if you make it.

Mr. Shaw, junior vice-principal, said he enjoys walking in the hallways. “I like getting out and seeing the students,” shortly after he said ” Just a lot of kids wait for the one minute bell causing them to be tardy sometimes.” He suggested that we all make a “conscientious effort to class. Maybe carry more materials so they won’t have to go to their lockers. Maybe talk to their friends less.”

It’s hard getting up in the morning and students’ brains aren’t exactly in full throttle. It’s hard to think about such things in the morning, but if everyone could join in then it could possibly reduce grumpiness and irritation in the mornings. Wouldn’t that be lovely?  Picture it: going around the school and seeing almost every student smiling and being kind to each other. It could unite us together as a school. It could possibly make our school spirit even stronger. That would be awesome.

Most of the school’s population can drive so that means we all aren’t oblivious to the fact that we know how traffic outside the school works. Everyone has an idea of how the ‘flow’ should work. It shouldn’t be this hard. There’s a right side and a left side. Just like a road. There aren’t cars parked in the middle of the road are there? Why should our school hallways be any different? It’s the polite and considerate thing to do. It’s Utah meaning we have those Utah drivers who think they are an exception and can act the way they want. There are no exceptions. This school is such a polite and considerate school. Why don’t we act like it?

Walking through the hallways is a struggle and everyone knows it. It’s going to be one of those things that take a very long time to resolve, but if everyone cooperates, it could become better. There would be no need to be anxious about walking. There would be no need for everyone getting angry with each other. There are some people who just don’t care and that’s fine. Just keep in mind the golden rule. “Do unto others as you would have them do unto you.”