Football team kicks off to the start of another good season 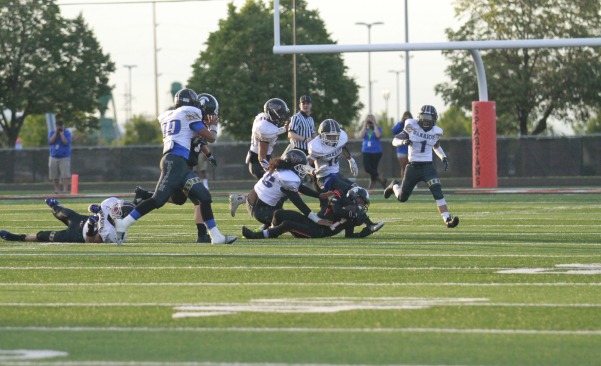 This year’s football team is off to a 4-1 start to the 2014 season after defeating the Kearns Cougars 34-0, the first game of the season. The Murray Spartans fell to a loss after the Warriors took the win with 17-13. The team’s first lost was against the Davis Darts with a brutal score of 33-0. The Warriors defeated the Olympus Titans by the score of 14-0. The Warriors would also conquer, a well known team in the State of Utah, the Alta Hawks with a final score of 23-17. Granger.

Over the past two years, Taylorsville has gone from being lucky to get away with one victory, to winning the region title. This is all due to adjustments and improvements that have been made through the program.

“Our strategies this year are to improve, fix the things that are correctable. Always be positive, stick to our foundation,” says Coach Wells.

The team’s biggest weakness is their mental state.

“We’re not consistent in our level of play and that’s a mental breakdown,” says Coach Wells.

One of the team’s biggest strengths by far is the coaching staff. With this being his 3rd year as the Head Coach, Rodny Wells is prepared to take on this season. The Assistant Head Coach and also the defensive coordinator, Pala Vaitu’u is certainly a name to recognize. The Offensive Coordinator is Coach Junior.

“The thing we probably learned most from [Coach Junior] is he comes out ready to play every week to put our offense against and their defense, and he just makes us better all together,” says Taylor Sa’au, Linebacker. “Then Coach Pala, our defensive coordinator, and assistant head coach runs the defense all together and he just brings so much experience and knowledge to our game, but he is really the reason we get ready for every game the way we do.”

“I can’t ever say enough about Coach Pala. The guy loves football and loves the kids,” says Coach Wells.

“Overall, I just have to say it’s a good change to the coaching staff,” says Sa’au. “We have a bunch of coaches that are very skilled, they know a lot and bring more knowledge to our game.”

After a very tough loss of 33-0 to Davis, a lot of the players reacted differently. There was a lot of emotion shown by the team after the game last Friday. The offense and defense struggled for the majority of the game against Davis.

“We had a wake up call against Davis that told us we need to have a better week of practice, we gotta be better prepared, we need to watch more film, we just gotta learn everything we gotta do. Overall, the practice week we had was just great. We installed a new defense, and everything just went perfect for us in that practice,” said Sa’au.

“After we get blown out like that, we just think of it as a learning experience and we come back knowing that next week we gotta work 3x harder,” said Sa’au.

“Overall, we just gotta play better,” said Sa’au. “We gotta do our assignments, do our jobs, be a team together, and when we do that, we can play with anyone in the state.”