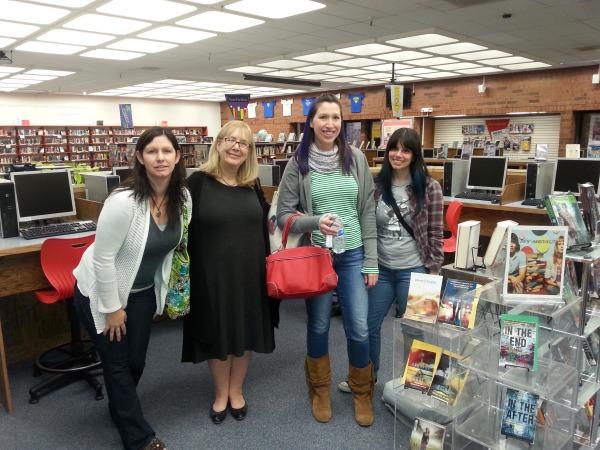 Four of the authors who visited our school pose for a picture in the library.

October isn’t just the month of breast cancer awareness but also the month that celebrates books and encourages teens to read. Teen Read Month was particularly highlighted on the dates of October 15 and 27 when different authors came during lunch to talk to students about their books. The most popular of these visits was the one on October 15; with four authors who came to speak and were greeted with a large group of attending students.

The library filled with  students who were there for English classes as well as just to be there out of personal interest, most carrying in lunch to snack on during the presentations. Three of the authors  provided similar powerpoint presentations that explained a little about their books. They talked about their inspirations and provided the book trailer. The fourth was a little different by actually reading a page of her book and talking about her inspiration in length. The visit ended with questions from curious students and quick mingling afterward.

The first author who spoke was Demitria Lunetta and she went through a power point she made of her books: In the End and In the After. She talked about her inspiration and mentioned how that is one of the most asked questions for authors. She as well summarized her books.

Mindy McGinnis was the second author to speak and she as well presented her inspirations and summaries of her books on a power point. Her inspiration was that she was watching an informational document one night about the resources of water and how there may not be enough for future generations  and then woke up after a dream she had that that night that was frightening but that she thought was  great idea for a book plot. Her books are Not A Drop to Drink and In A Handful of Dust.

The third who spoke was Kate Karyus Quinn, she as well, showed a powerpoint and answered the same questions. Her books are Don’t You Forget About Me and Another Little Piece.

Ann Redisch Stampler was the last visiting author to speak and she presented her information about her book in a different way. She did not have a powerpoint to present but she had her book. She read the first page to the audience and explained her inspiration for the story. Her book is called Afterparty. She is also the author of Where It Began and many childrens books.

Each author had their own unique personality and story. However each seemed to have a sense of humor, cracking small jokes here and there, and gaining a laugh from the audience.  All these authors books had a common theme though: fear. The stories revolve around horror, murder, and a dystopian community. All the books are young adult science fiction and fantasy.

Librarian, Lorraine Wynoss, said,” I wish for a longer period of time to give the authors instead of just that 30 minutes during lunch. Because the authors are willing to stay longer but with classes  it makes it difficult finding the time.”

The librarians at Taylorsville feel we are very fortunate to have these author visits. Thanks to the help of the King’s English Bookstore, we receive visits from willing authors for free of charge. They also notice that students often don’t realize or appreciate that most of the movies they see are based off of books. With these visits they hope to create interest in writing for students.

“I hope that students get excited about reading and writing and that one day we’ll get students who become authors as famous as J.K Rowling.”, said Wynoss.

With Teen Read Month over,  a new literary themed month has come called National Novel Writing Month (NaNoWriMo). This month holds a national competition where you write and submit a 50,000 word draft of a novel you have written. The librarians at Taylorsville currently don’t have a competition set up, but they are toying with the idea of having an idea box in the library where you can turn in novel ideas.