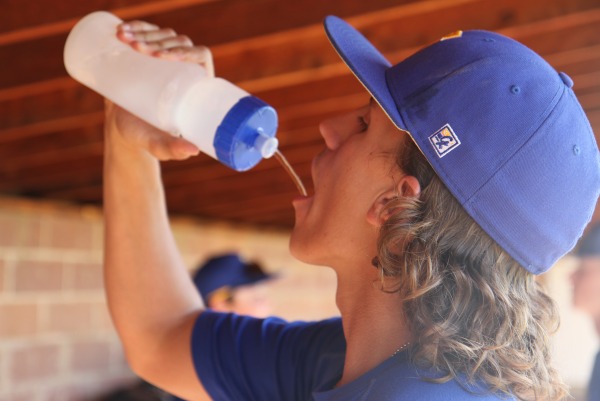 Cole Fivecoat, junior, drinks water instead of soda, or other unhealthy drinks, to stay hydrated during baseball practice.

The majority of parents will put their young children on a sports team of some kind, sometimes by forcing them. Parents do this because children who are 5-10 years old lack a sense of consequence/reward, working with others, and other fundamental skills. When children are this young, winning a game isn’t enough reward for them sometimes, so the parents will reward them, usually with dinner/dessert. And a majority of the time, it’s a Happy Meal from McDonald’s.

A toy, usually some sort of action figure representing the latest trending TV show, their choice of food, and their choice of a 12-16oz. drink. The several different drink choices include soda and 60% of the time, soda is the favored option.

Many parents don’t even think twice when their kid asks for Rootbeer or Sprite because it’s their reward; they earned it. If a child asked for alcohol, any parent in their right mind wouldn’t hesitate to say no. The effects of alcohol are more immediate, palpable, and definitely more aggressive. But there are plenty of harmful effects given off from soda that if parents were more aware of, they might think twice before rewarding their children with it.

Soda, like many other things, can become addictive. Beginning to drink it at such a young age can initiate a danger to their health and several long-term side effects. When these children become high school athletes, and little league becomes varsity football, they need to take the effects of soda into consideration if their parents haven’t already.

“What you see on the commercials of the big athletes promoting McDonald’s, and Sprite and Coke, it’s all about the money, which is sad. But most of them won’t drink soda. And it’s not just athletes either, it’s people in general,” said Coach Wells.

Soda can cause obesity, cancer, accelerated aging, and many other things. When athletes drink soda while exercising, the carbon gas from soda reduces the oxygen intake. A lack of oxygen makes exercising nearly impossible for any athlete.

Many athletes have little knowledge about how dangerous soda really is, so they continue drinking it, sometimes even on a daily basis. Head Coach of the football team, Rodny Wells has found a ostensibly beneficial way to spread the awareness of soda and it’s many detriments.

“We have a nutritionist who comes in and talks about what foods [athletes] should be eating during the season and during training because it differs based on the time of year,” said Coach Wells.

The team not only practices in healthy alternatives to soda, but also in healthy eating habits.

“We have a pre-game meal that’s higher in protein and less carbohydrates so that we can have fuel to sustain ourselves,” said Coach Wells.