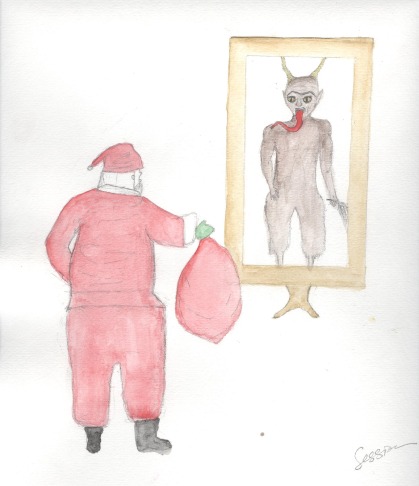 Here comes the time of year to spread holiday cheer and douse ourselves in unholy fear. Santa makes his way through chimneys to leave charitable gifts for all the good little children as Krampus slips into the rooms of all the naughty ones to drag them off and devour them the next day.

Primarily in Austria, Christmas tales and folklore include a wicked character that has yet to be introduced to the majority of Christmas-celebrating households. There is a multitude of names to call him by, including Knecht Ruprecht, Certa, Perchten, Klaubauf, and Schmutzli, but he is most commonly known as Krampus. His image is most comparable to fauns of the Narnia variety, but with more upper-body hair. The fur covering his body is as black as night, the horns on his head scar the rooftops of naughty children’s homes, his astonishingly long tongue writhes and twirls at the sight of his next meal.

It’s said that Krampus was brought onto Santa’s crew after Santa proved himself to be incapable of handling the punishment of naughty children due to his jolly and kind personality. Children are generally led to believe that, if their behavior is unsatisfactory that year, Krampus will sneak into their home and beat them with whips and rusty chains before hauling them off into the night to be eaten.

We, The Warrior Ledger Staff, believe that adopting the Krampus tradition would benefit our community. Familiar Christmas traditions have been around since the late 1800s and having the same yearly routine for more than 100 years gets dull. It’s obvious, it’s in the air, the classic Christmas is coming to the end of its holiday lifespan. Hollywood is running out of Santa tales to tell and if stores began their Christmas sales any earlier, we would be seeing trees and ornaments “for cheap” in all twelve months of the year. It’s time for a change.

Over the years, children have stopped believing tales of Santa Claus at younger ages than previously recorded. During the few years of childhood they have, each generation of kids has decided to end the magic a little sooner. Introducing Krampus surely wouldn’t extend the years of the illusion any further, but it would add an extra kick to the fairy tale magic.

The point of rewarding children with cute little presents on Christmas was to let them feel appreciated. Though our alternative to the gift giving isn’t much of a punishment. Our version of Christmas cuts out Krampus completely and, instead of being beaten and eaten, we’re told that Santa will leave a lump of coal in our stockings. Coal, even just one lump of it, could entertain a child for hours. It’s chalk, it’s a magical stone, it’s a relic of the old age, it’s coal! Coal can be whatever a child decides that it is, but being beaten and eaten is just what it is. A child cannot make any fun out of such a dreary punishment. Children who believe tales of Krampus will feel truly grateful for the gifts they see in the morning and any child who wakes up to see a room devoid of gifts will be truly terrified.

Adults and us teenagers are less impressed by Christmas as more years go by. Giving and receiving gifts or getting emotional with people we may or may not actually be that close to are the only things people our age have going for them on Christmas and (face it) all of that could be done during any other time of the year. Aside from the time off school or work, Santa is what makes the holiday special, but his antics don’t appeal to anyone older than twelve. The holiday loses its standing as a unique day of the year. However, the entire concept of Krampus appeals to nearly everyone. Introducing Krampus to the American version of the holiday would give the holiday more substance and pull more mature audiences back into the celebratory scene.